Banks of letterboxes for housing developments and estates?

With the Royal Mail seemingly forever looking at reducing costs without reducing their level of service, the future of mail delivery in the UK is as uncertain today as it has ever been. Add a dash of privatisation and who knows what could happen?!

The advantages of banks of letterboxes in communal entrance and lobby areas of apartment blocks is immediately apparent. The cost to the Royal Mail, and subsequently the sender and the receiver of the mail, is significantly reduced when the postman or post woman only spends 5 minutes delivering to a bank of letterboxes rather than 10 minutes by walking to each front door within the same block of flats.

Any business which could potentially reduce one of its significant costs by half would press for such measures. But the Royal Mail is understandably cautious on reducing a level of service which has been part and parcel (sorry!) of every day life for hundreds of years. (Since 1660 in one form or another).

To look at it another way, what if the Royal Mail already delivered mail to a central delivery point on each housing estate, on each road, and in each city in the country. Imagine the uproar if they announced that they would change from central residential mailboxes to deliver letters to each residents door, but that the cost of sending that piece of mail could cost the sender double?

And so, one would expect in time that new housing developments, as well as apartment, student accommodation and mixed-use schemes, will increasingly have central banks of letterboxes incorporated into their planning, rather than letter plates in each front door.

The cost of mail delivery is the major benefit here. The cost savings are obvious.

But it is not just the Royal Mail and their customers who would benefit from such a proposal. Not having a letter plate in a front door has long been championed by the Police and crime prevention groups such as Secured By Design. The widely held belief is that a letter plate is the weak point on a front door. Would be thieves look through letter plates of potential target’s homes and then use a variety of techniques to carry out their crimes via the letter plate.

Removing the letter plate would seem to make sense then. 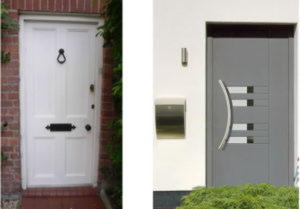 Letter plate or post box? Which is the most secure?

There is also the potential of an increased sense of community. In an age when more of us are becoming less involved in the communities in which we live, a communal area which houses a bank of letterboxes for a new housing estate may be seen as a way of bring the local people together, a place to meet and chat, where residents could get up to date issues regarding their communities.

There are however some obvious concerns with having centralised banks of letterboxes. The first is security of mail. The letterboxes must be secure. Whilst no letterbox infallible, there are plenty of secure letterboxes available on the market – take a look at our range of anti-theft letterboxes to see what we mean.

Access is another issue. The Royal Mail would prefer the boxes to be as close to a main road as possible not help minimise delivery costs. Residents would want the letterboxes to be easily accessible by both car and by walking.

And the good old British weather. Most of us take for granted the convenience of not having to venture outdoors in a force ten gale to collect our letters. So having to pop out to our letter box just to collect the odd utility bill would seem too much of an inconvenience.

The greater inconvenience however is that the Royal Mail is an inefficient service. As the costs of sending letters and parcels goes up, so do the number of complaints, whilst the levels of service go down. It is for this primary reason that the Government is looking to privatise the Royal Mail. However, Post Boxes UK also believes that communal banks of letterboxes for new build housing estates (as a minimum) may become the norm, and that this may even give rise to similar banks of mailboxes for existing housing developments.

GARC International – We say a fond farewell to one of our favourite manufacturers
March 27, 2020